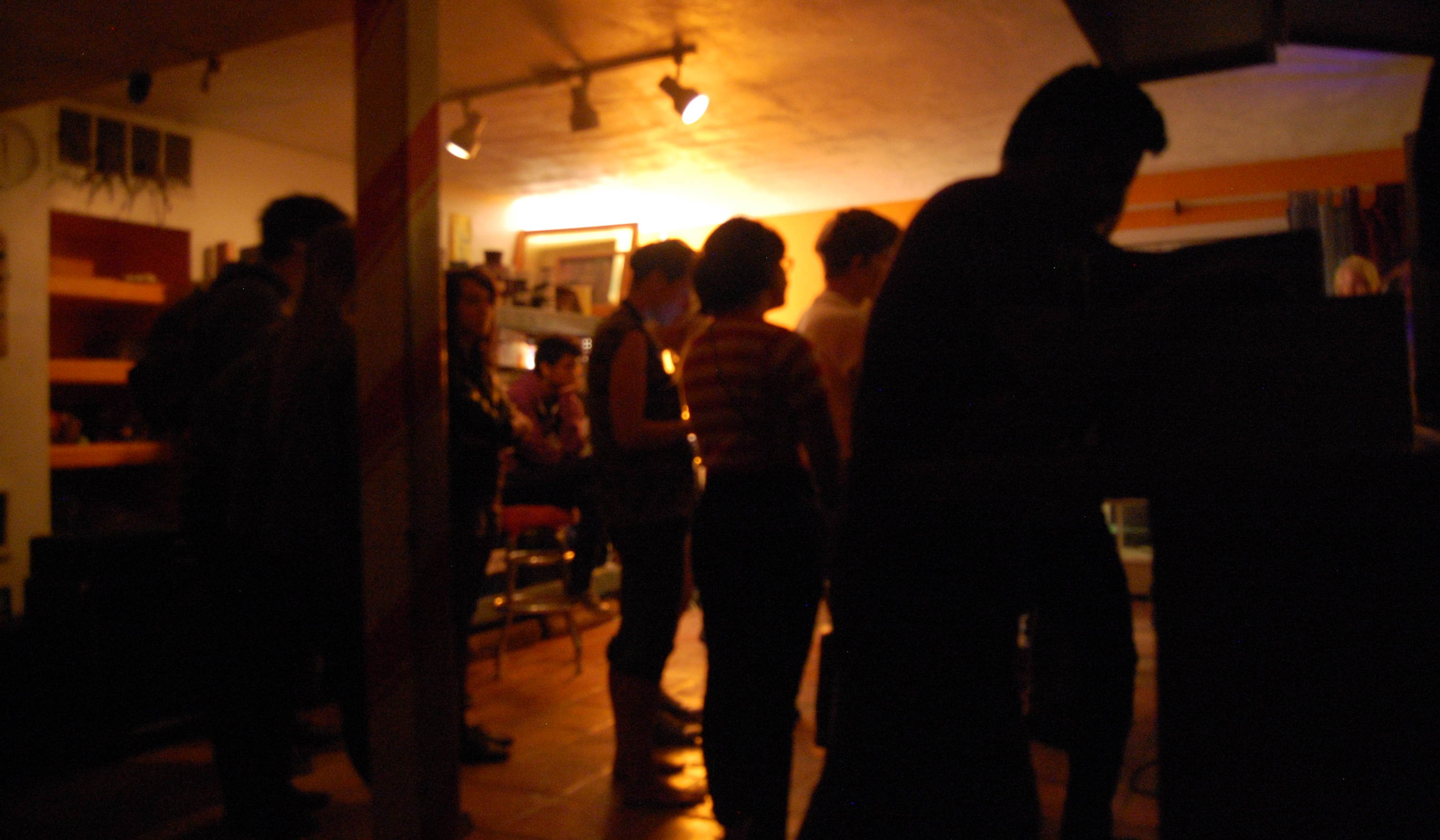 The other Sunday night at 11 PM I found myself in a garage in an industrial park somewhere in South Phoenix, surrounded by cigarettes and pot smoke, listening to a punk show. Nine hours later I was having a conversation about St. Augustine.

This is a representative sample of my present life, which is both awesome and strange. I suppose it is healthy to be around people who aren't professor's kids (like all of my Ithaca/Chicago friends), but it is a bizarre dichotomy. It seems appropriate that I have to ride my bike 15 miles in between the two cultures (home and school), as I kind of see myself as a living median between these extremes (starched shirts and bleached hair). I wear t-shirts, but I also read the Wall Street Journal. The only time I am really in my own world is when I am on my bike, which, ironically, is the time that I'm most in Phx, surrounded by the evils of SUVs, suburban subdivisions, and gas stations.

In school-world, I've been teaching logic and set theory to the 12th graders. It's a lot of fun, because it's really advanced stuff to be teaching in a high school, the kids are (surprisingly) good at it, and it's something I've never taught before (so it's kind of challenging). I don't have the same level of confidence in this material as I do with calculus, so rather than writing my own notes, I've been teaching them out of a college textbook. When we start baby abstract algebra next week, I'll be teaching them using the textbook I was learning from two years ago. It's surreal. (And I think my students would be distressed if they knew what grade I got in that class.) But the material is really abstract and really beautiful (compared to the usual high school stuff), and we've been drawing all these awesome connections and parallels to all these fundamental ideas. As is appropriate, everything is fusing together right at the close. (In our end is our beginning.)

In house-world, we hosted a "touring vegan chef" a few months ago, as a slight variation on the usual theme of hosting touring bands. Rather than play a show, he made the 20 or so attendees a six-course vegan meal. It was delicious, and I really like the idea of being a "touring X". Plus, as a result of being more-or-less in the right place at the right time at that party, I've been part of what gets called "foodchain" by the five other people in it: six nights a week, myself, my roommates and three other people trade off cooking dinner for all of us. It is a wonderful arrangement. Rather than making some uninspired stir-fry and then poking at the leftovers for the next week, I get a delicious, home cooked (vegan) meal nightly. (As well as forced social interaction.)

The fact that it's tastier and healthier makes sense, but what's surprised me is the extent to which it's improved my cooking: now that I'm performing for other people rather than singing in the shower, I actually put a lot of thought and effort into my dinners. I've always liked cooking, and I've always considered myself a reasonably decent cook. But for the last year or two I've been frustrated that I've been in a rut—I only cook variations of three or four different things. But now I can't cook the same thing every week. So I actually have to put forth effort and creativity—make new things! from scratch! multiple courses! Last week I made falafel, roasted red pepper hummus, and a fried onion/eggplant/etc. mixture to stuff pitas with. The falafel were actually soft and juicy on the inside—I've never had falafel that weren't burnt to a crisp. For desert I made this Afghan sweetbread with cardamon/saffron/pistachio/rosewater. Foodchain is a great motivator, and I wish I had something similar for reading and thinking. A bunch of friends of mine in Chicago run a weekly lecture series—someone talks for an hour about something they're interested in, and between five and twenty people show up to listen. That would be nice. (Or, you know, actually taking classes again.)

My other current hobby is impulse-buying $100 of books from Amazon.com, and then organizing them into piles on my floor. I do this once every month or so. Perhaps once I'm unemployed, I'll actually read them. (History seems to suggest skepticism towards this conjecture.)

Unemployed, incidentally, is what I'll be after May 28th. (Or, technically, after July 31st, since that's when my contract expires.) I told my principal this week. I don't think he was particularly pleased, and it was a hard decision—I really love teaching, and I have a social life here now. It is pretty awesome to quiz a student about Wittgenstein at their senior thesis defense, and four hours later be eating burritos on the floor of an abandoned warehouse. But the longer I am in Phx the harder it will be to leave, and in many ways I find teaching too easy—it's not difficult and terrifying and enlightening, in the way that learning new material for the first time is. I don't want to be—if you'll forgive me for the cliché—I don't want to be in my "comfort zone."

We are having a faculty seminar in a couple weeks about T.S. Eliot's East Coker, which I am super-stoked for, since it's one of my favorite poems. The ending lines seem appropriate:

We must be still and still moving
Into another intensity
For a further union, a deeper communion
Through the dark cold and the empty desolation,
The wave cry, the wind cry, the vast waters
Of the petrel and the porpoise.

So I am completely terrified of "what comes next." I need to be in Seattle for a wedding in September, but that's really my only future obligation/plan. I guess on May 29th I'll drive back to Ithaca, drop my stuff off at home and get rid of the car, and then...