You know the premise behind a Midwestern state fair.

The whole state gathers in one spot for a week to eat local delicacies, judge each other’s livestock, play games, listen to music, and elbow through crowds in a celebration of regionalism, agriculture, and Jeffersonian democracy.

The expedition that R. dragged me on last week asked the question: what if, instead of convening in a single place, the whole state traveled around itself? (The progressive dinner equivalent of a state fair.) And what if all that traveling happened via bicycle?

(You also know the premise behind my missives: Andrew drones on until he runs out of space. This email is no different! Please, feel no obligation to read on—my love for each of you isn’t conditioned on it!) 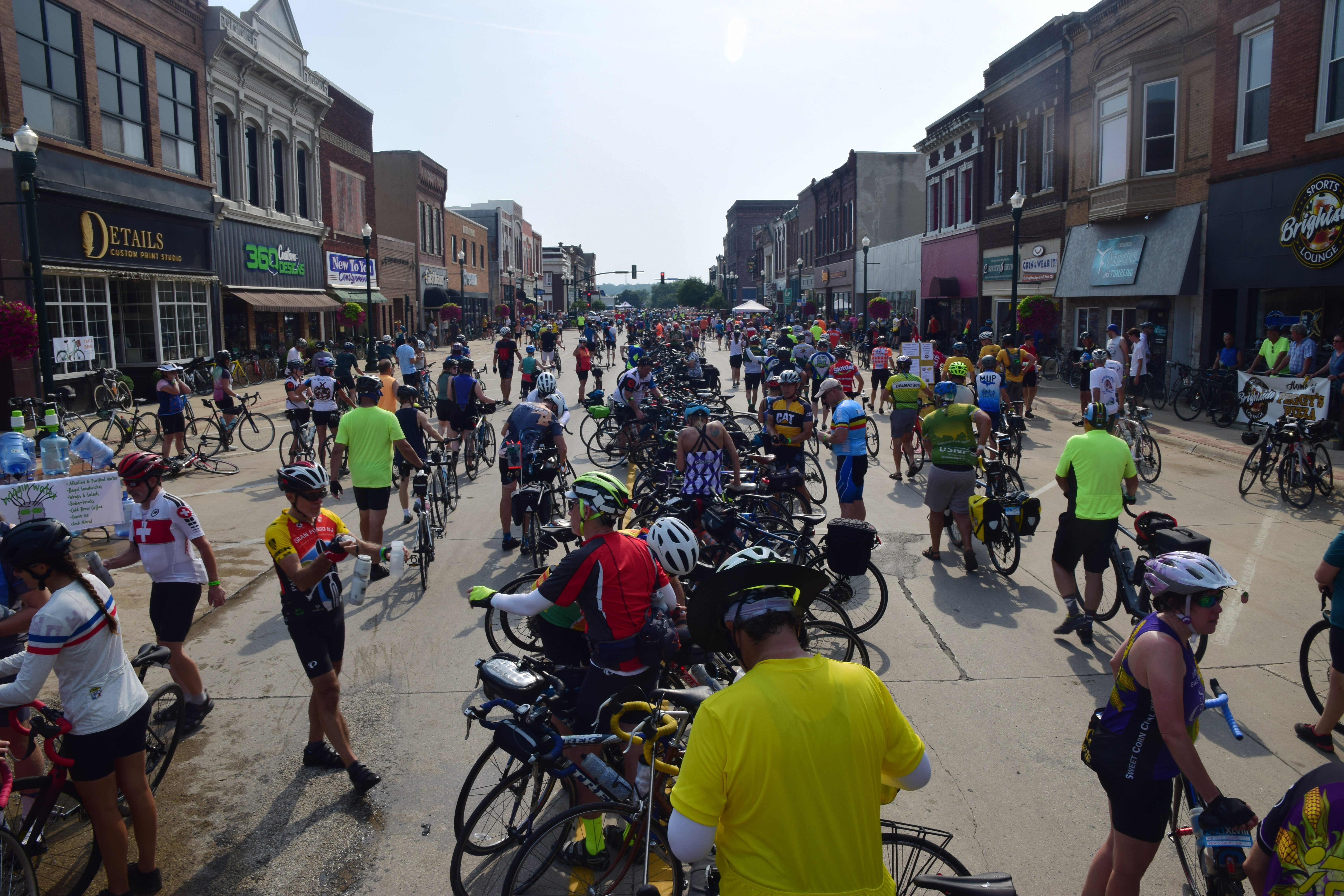 R., S., and I spent the week biking 481 miles across Iowa, from the Missouri to the Mississippi, along with 15,000 other people. We ate spaghetti dinners in church basements, we went swimming in rivers full of agricultural runoff, we stuffed ourselves with free corn, we took selfies with cows, and we suffered all the expected mechanical, physical, and emotional breakdowns.

RAGBRAI—the Register’s Annual Great Bike Ride Across Iowa—has been going on since the 70s. I’d never heard of it, but R. had, and she’d been wanting to do it for years. Every July, between ten and thirty thousand people (mostly Iowans) bike from one side of the state to the other, a different route each year, stopping in tiny towns every ten or fifteen miles along the way. Many of the towns are just a few hundred people (plus a water tower and a grain elevator). Everyone comes out to show the riders a good time. All the community organizations have bake sales and feed everyone pie. The volunteer fire departments set up do-it-yourself slip-and-slides (dish detergent and fire hoses) and pools (dumpsters lined with tarps and inundated). The 4H kids show off the animals they’ve been raising. Older farmers show off the antique tractors they’ve been restoring. People set up lawn games. There are pull-up and hay-bale-tossing competitions. A central organization oversees RAGBRAI, nominally, but the vast majority of it is emergent and spontaneous. People know the riders are going to show up, so they just do stuff. 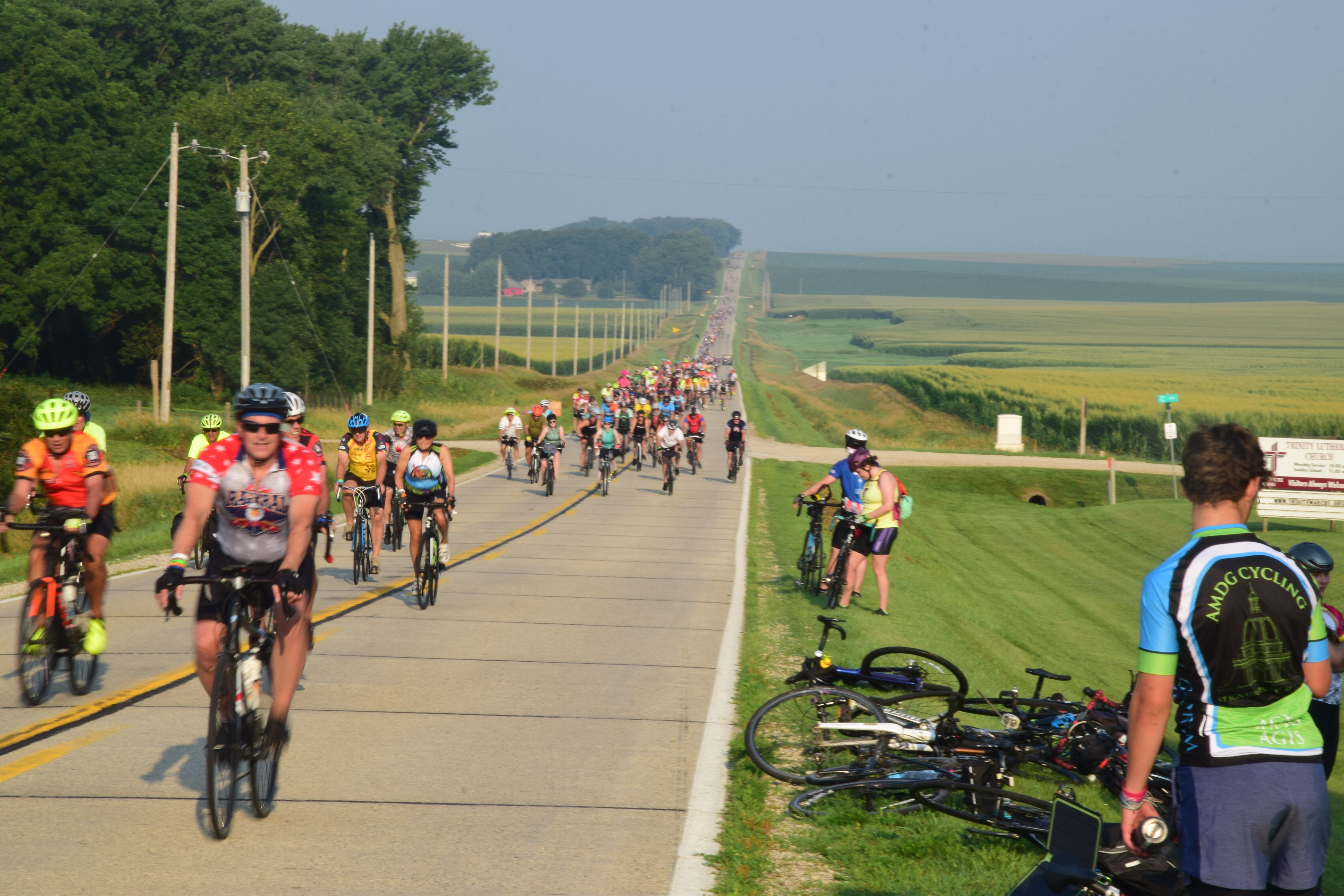 In Fort Dodge, a guy with a hydraulic lift company had parked two of his hydraulic lifts in a vacant lot downtown, and was offering rides (according to a hand-drawn sign) for $10. I watched a middle-aged couple be lifted and cantilevered thirty feet up and ten feet out. At the controls was a kid, no more than 12 or 13. I assume he was the son of the owner, but who knows? There were no permits, no regulations—it just sort of happened.

Biking in to DeWitt, a middle-aged Midwestern woman shouted at me that I could get a free stick-on mustache if I threw a javelin. They had a whole set-up: javelins, hay bales with spray-painted targets, and a middle-schooler to teach you how to throw. I hit the target on my first try (barely). I got a free stick-on mustache, and a free beer, too. It was the most frat or hipster activity imaginable—yet it was being run by these prototypical middle-aged Midwestern women. It wasn’t clear to me why they had decided to set up a javelin-throwing competition in the middle of a field. It wasn’t a fundraiser. It was just—a thing they had decided to do.

Portable animal pens filled with goats were everywhere. In downtown Lytton someone was displaying their Highland cattle—the long-haired, long-horned Scottish breed, looking like tiny yaks, very sweet and gentle, and not at all grouchy like most cows. One of them sniffed me as I ran my fingers through his hair, and I thought not just about cheeseburgers but about sweaters. We participated in a world record attempt for the world’s largest goat yoga. It was my first time doing any sort of yoga. We played with piglets and then, minutes later, ordered smoked pig butt mac’n’cheese for lunch. We passed signs to “SEE THE WORLD’S LARGEST STEER: TEN MILES!” and “PUT YOUR REAR ON THE STEER: FIVE MILES.” I thought it was going to be a statue—we had just passed the World’s Largest Popcorn Ball that morning in Sac City—but no, it was an actual animal, lying down under a tent, with a fan blowing on him and a tween Future Farmers of America type chaperoning. The world’s largest steer? “Well, he’s the biggest in Iowa. At least around here. That we know of. There’s one in Washington State that weighs 3,000 pounds and is still growing.” Buford, age 7, was 2,520 pounds at his last weigh-in. The tween was charging $5 for photos. Buford didn’t even seem to notice when multiple people climbed onto his back.

The Iowa Pork Producers Association had a booth set up at a different location every day. The 2021 Iowa Pork Queen was there, in the flesh. R., maker of malapropisms, kept calling her the Pig Princess. She asked us trivia questions about pigs in return for swag. “I don’t know any of these,” I said. “I’m from New York.” “I’m sorry,” she said. We got the questions right. It was less from knowledge and more from elite college test-taking ability. So she gave us free t-shirts, targeted exactly at coastal urbanites, with the text “PORK: IT’S WHAT WE SMOKE HERE.” The Iowa Corn Growers Association set themselves up along the route every day, too. They gave out free sweet corn. They were soaking it in kiddie pools, roasting it in a huge specialty-built corn roasting trailer, and dunking it in literal crockpots of melted butter before handing it out. But first you had to walk through their exhibit trailer. S., a left-wing plant biologist critical of Big Agriculture, called it “corn propaganda.” On our last night we went to a “steak dinner” hosted by the 2021 Clinton County Cattleman’s Queen. The motto of the Clinton County Cattleman’s Association, dramatically rendered on a banner with an American flag graphic in the background: “Faith. Family. Cattle.”

There were very few Trump signs. I only saw five or six the whole week, plus one basketball hoop whose backboard was in the design of a Confederate flag. Actually, there was very little politics altogether. The only exceptions were in the spirit of state fair oddities: a booth organized by “Iowans for DC Statehood,” and the 2021 Libertarian gubernatorial candidate mixing up free Bloody Marys and gins-and-tonic at 11 in the morning. His first priority when elected? End the drug war. A copy of Michael Pollan’s book on psychedelics was open spine-up on the chair behind him. Iowans for DC Statehood, meanwhile—an organization making generous use of the plural—had lawn signs, petitions, and copious free merchandise, all in a tent in the middle of nowhere next to a cornfield. I got a gorgeous, fully-printed synthetic t-shirt, which I intend to start wearing whenever I want to confuse people.

R. and S. showed up to a Catholic church in Moorland soaking wet and wearing nothing but sports bras and bike shorts. None of the middle-aged church ladies in the basement of Our Lady of Wise Counsel looked surprised. Instead they just forced “cherry jello in apple sauce” on us. (We had come from the fire department’s slip-and-slide, hence the basse couture. I had at least put on a t-shirt.) A few minutes after we arrived, the American flag guys showed up: two men biking RAGBRAI wearing nothing but American flags as capes and speedos with the design of an American flag on them. R. had already put her shirt on by that point, but was thrilled to get a photo with them. (I told her she was a blasphemer. She said she’s Jewish. You’re still American, I said.)

People ride in costumes. People ride things other than bikes. The median age of RAGBRAI’ers was about 60—this was not a young person’s ride—so there were plenty of recumbent bikes and tricycles. There were tandems. We saw a few triple tandems, and even a triple trike. There was a team of half a dozen roller-skaters. There were a few people on elliptical bikes. Elliptical trikes. There was at least one unicyclist. R. spent most of a day biking with two older Yale alumni—it was “College Jersey Day,” and she was wearing a Cornell t-shirt with an unprintable characterization of Yale on it, which is how they linked up. They were riding a tandem. One of them had macular degeneration and was sitting in the rear seat providing the power. His friend in the front was steering. At Yale in the 70s they had rowed crew together. The guy in front had been the cox—then as well as now.

Iowa is beautiful. What a great state. In the west are the last wavelets of the Great Plains—rolling hills with long and gentle rises, perfect for biking. They transition in a sputtering, inconsistent way to steeper hills and more forests and more streams in the east. The route was almost entirely on back roads. They weren’t officially closed to traffic, but it’s hard to drive when there’s a peloton of cyclists taking up both lanes for hours in both directions. Iowa State Patrollers and local sheriffs block off all the intersections. Most of them had brought sound systems and were blasting music and dancing along in uniform as riders streamed by. 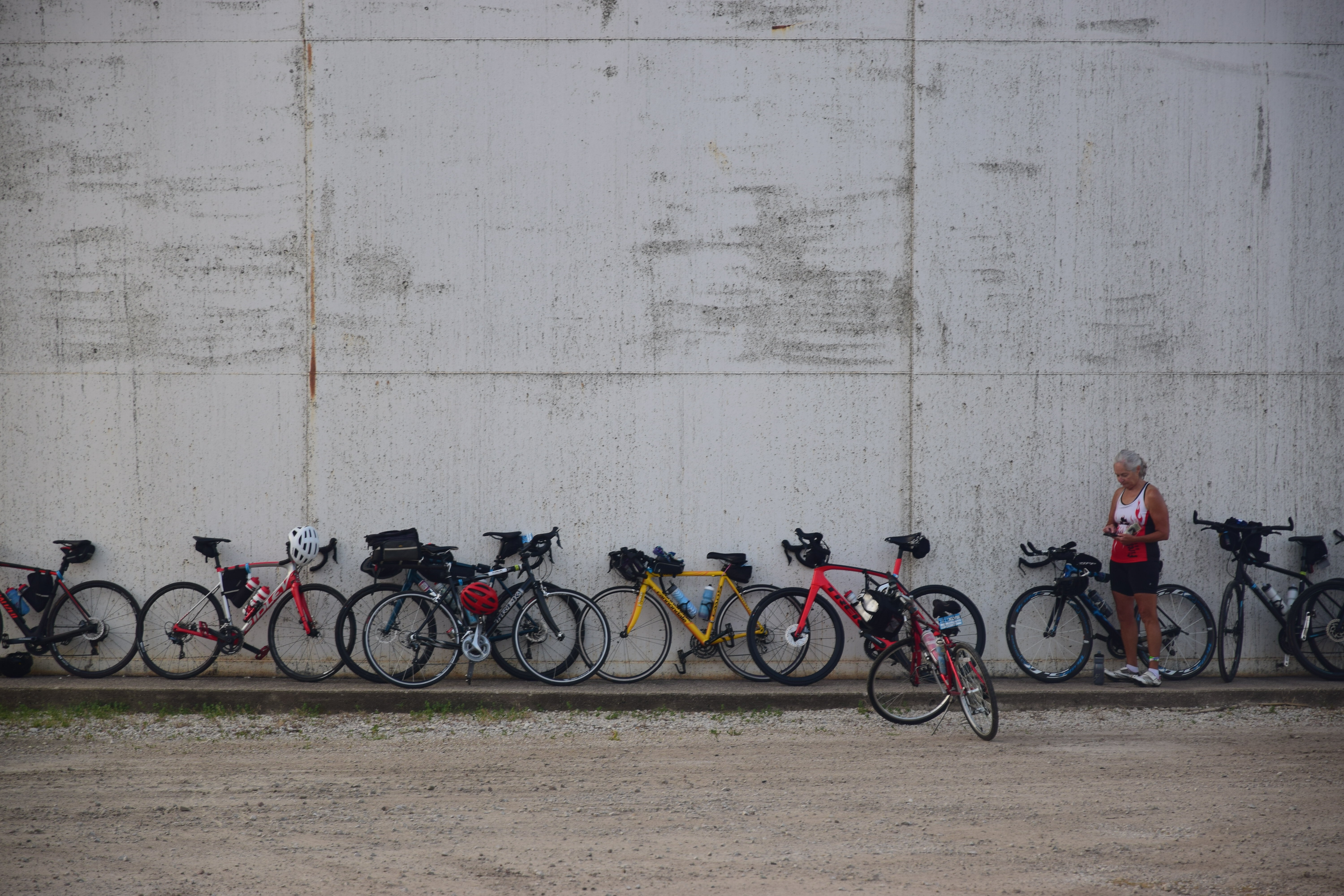 First: I had zero geographic proprioception the entire week. No need to have a map or a turn-by-turn cue sheet or any sense of where you are: just follow the giant stream of bicycles. In some sense this was convenient—I never had to think—but in another sense it was distressing. My sense of direction has always been very important to me. I generally refuse to use GPS devices, because I want to force myself to know exactly where I am and how to orient myself in space, all the time, relatively and absolutely. But during RAGBRAI? Total deracination.

And second: I wish it didn’t all blur together. We stopped at a half-dozen towns every day for seven days. Fifty in total, according to the official map. We had a large number of superficial experiences, rather than a smaller number of deeper experiences. There was no narrative structure or development (much like this letter)—just disconnected, isolated experiences. We parachuted in as tourists from New York and California and indulged in the hospitality of these kindly Midwesterners who gave us rhubarb pie and pork chops. That’s entertainment. (Verging on exploitation.) It’s not a deep, reciprocal intimacy with people and with a place.

Still, I thought: if I were an Iowan, and did this every summer, what a beautiful tapestry of Iowa I’d weave in my mind! What a wonderful way to get to know your state! What a way of making labels on a map real and vivid and concrete! 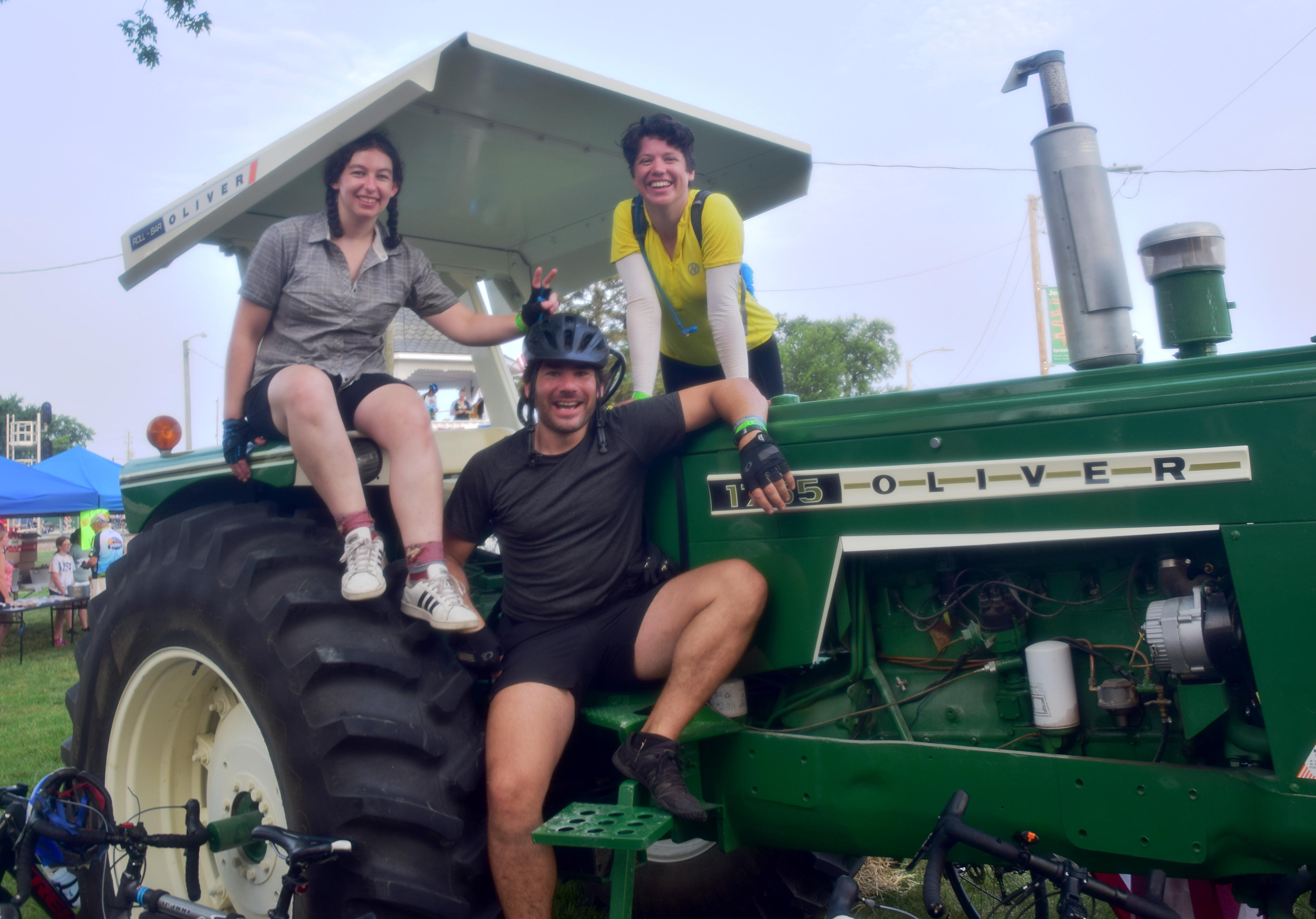 As you can see from the dateline, I’m still in the Midwest. I took the train out from California, and was going to take it back, but while we were biking mudslides destroyed the tracks through the Rockies. So, standing at the ticket counter in Chicago Union Station, with no other way of getting home, I impulsively switched my destination to Minneapolis. A few hours later I surprised Grandma Jean by showing up on her doorstep at 11 PM. I’ve been here for the week, enjoying the humidity, the Star-Tribune, and the percolated coffee. I know I’m prone to big talk about being “from New York” and about ancestral roots out West—but this summer has been one of fully accepting my Midwestern patrimony.